I thought I would share a card I made for my son-in-law’s birthday. His mum is also a SU! demo (my first recruit) … and I always have to smile at his responses! He really is not the least bit interested with these cards … but with a mum & mum-in-law soooo into card making … he has to pretend to be impressed!!! 😀 I like to torment him … he knows I am waiting for an appropriate response to the time & effort I have put into his cards!!!

So … I have to acknowledge a little inspiration from a gorgeous card that I saw recently for one of Keesh’s colour challenges. Louise created the most amazing card … and since then I have seen her design popping up on several other blogs. Obviously, I was not the only one blown away by her card! So … instead of CASING exactly … I have put a totally different spin on her original idea -> Stamp2it. My stars also have the vellum backing … but the glitter is the Chunky Sprinkle rather than the pretty Dazzling Diamonds that Louise used. 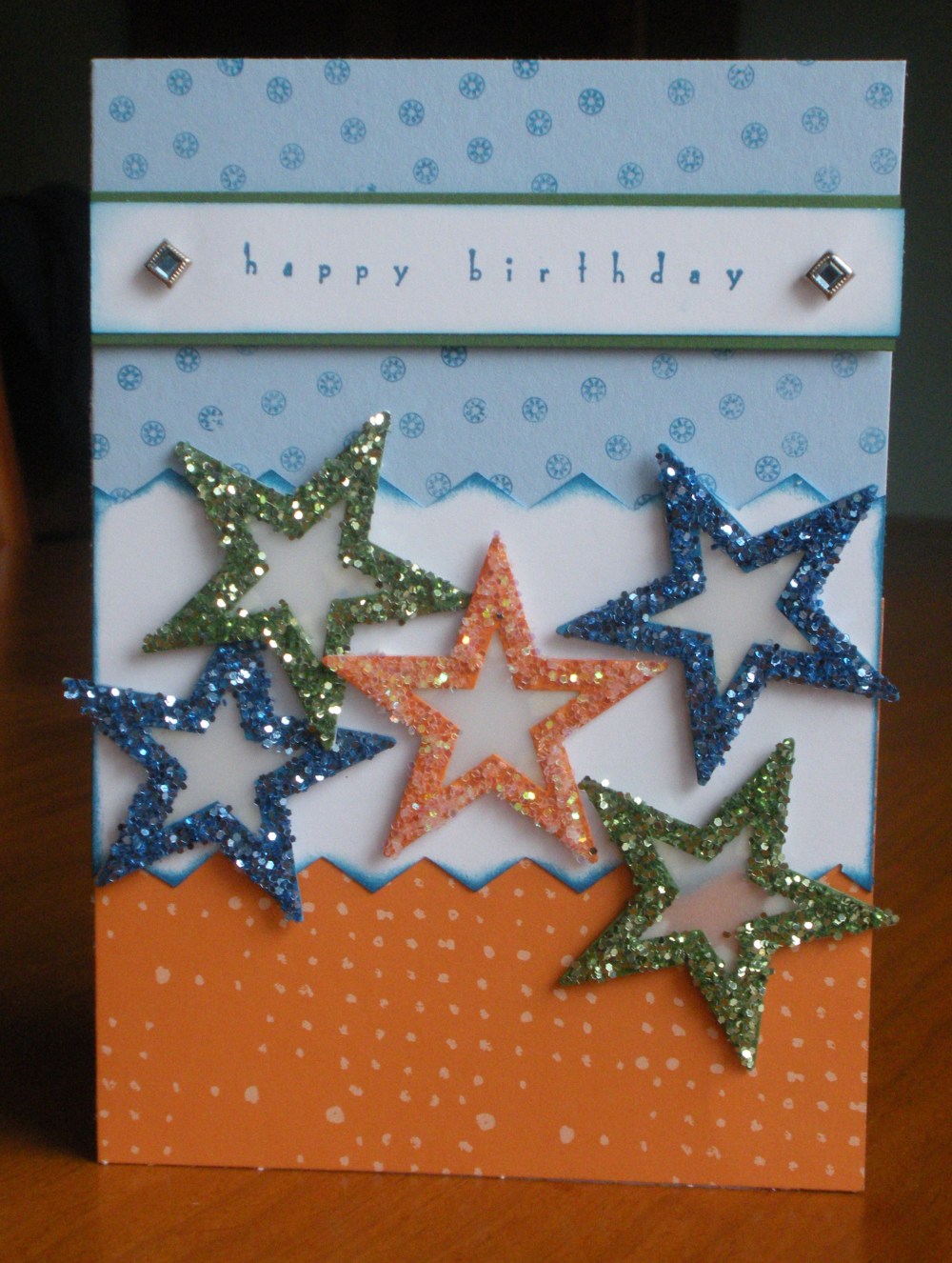 Here is a great colour combo using one of the brand new in-colours – Pacific Point. I was quite taken with this combo … especially for a male card! Pacific Point (Stars & stamping), Garden Green, Pumpkin Pie & Bashful Blue.

So there are a couple of things I wanted to highlight about this card.

1. The zig zag edge on the white strip. This was done using the small star punch. Yes! that is how I have got a completely even zig zag & no extra little “snips”. So … how did I do it? It is a little tricky to explain … but not so hard to do … Perhaps a little diagram might help??? (for all those “visual” people!!! 😀 )

You can see that I have started punching in the centre … and as I travel outward along the edge … I have made sure the top corner of the star just very slightly overlaps the corner of the previous star. I have also lined up the two “inner points” along the bottom edge of the card. It is a little like scalloping along an edge with a corner rounder punch! But …  I think perhaps zig zag is a better alternative to scalloping on a male card??? Anyway … I hope that is easy enough for you to understand??? I finished the zig zag off by sponging some Pacific Point colour along the edge to emphasise the zig zag! Clever huh!!!??? 😀

2. The stars are made by using the small star punch to punch out the centre … and then use the large star punch & line it up around the small star “hole” in your card. These were then backed with vellum – punched with the large star punch & glued onto the back of each star with 2-way glue pen. This gives the stars a softer look on the card … just like Louise did with her flower petals. I was kinda wishing I had used a different colour other than white for the zig zag strip … because the vellum would have shown up better … but I do like the Pacific Point ink on the white card. Very bright & fresh!

So … I hope you enjoyed a couple of new ideas on this card. It is always nice to discover new ways to do things, isn’t it!